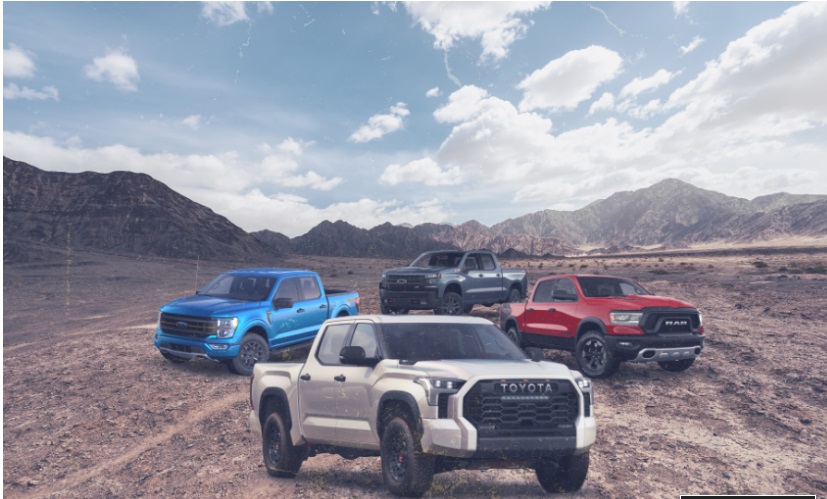 Off-road-oriented pickups have grown increasingly popular in recent years, with the bulk of the action centering on the vaguely defined space between standard half-ton trucks and hard-core desert runners such as the Ford F-150 Raptor and Ram 1500 TRX. This middle ground is where the Toyota Tundra TRD Pro is designed to compete, and the 2022 model will have plenty of four-wheel-drive company when it goes on sale later this year, from Ram’s current 1500-series Rebel to the recently introduced Ford F-150 Tremor to the also-new-for-2022 Chevy Silverado 1500 ZR2—stout competition that Toyota’s redesigned Tundra will confront both in the marketplace and on the trail. While Toyota has yet to release all of the new TRD Pro’s specs, we have seen enough to get an idea of how it compares against its peers.

Toyota is not messing around under the new TRD Pro’s hood, fitting it with the Tundra’s most powerful engine option as standard: a hybridized twin-turbocharged 3.4-liter V-6 good for a combined 437 horsepower and 583 pound-feet of torque, plus a small degree of electric-only motoring at low speeds. Although Ford offers a similar (yet slightly less powerful) PowerBoost hybrid option on the F-150, the Tremor model can only be had with a nonhybrid twin-turbo 3.5-liter V-6 making 400 horses and 500 pound-feet. If you want more than six cylinders in your rig, you’ll have to look to the new Silverado ZR2 and its standard 6.2-liter V-8 (420 horses, 460 pound-feet) or the Ram 1500 Rebel with its optional 5.7-liter Hemi V-8 that develops 395 ponies and 410 pound-feet of twist; a 305-hp 3.6-liter V-6 is standard on the Rebel, with both of the Ram’s powertrains aided by mild 48-volt hybrid assistance that’s standard on the V-6 and optional on the Hemi.

As with the Tremor and the ZR2, the TRD Pro harnesses its power with a 10-speed automatic transmission. The Rebel is the outlier with its eight-speed automatic, but that excellent, ZF-sourced gearbox is hardly a demerit. Moving rearward, both the Rebel and TRD Pro employ a conventional part-time transfer case with selectable high- and low-range four-wheel-drive modes. Only the Silverado ZR2 and F-150 Tremor feature a full-time system with an additional on-demand Auto setting, with the Ford borrowing the higher-tech case from the burlier Raptor. An electronically locking rear differential is standard no matter which of these trucks you choose, yet the ZR2 is the only one to offer a front locker as well. Ford says it will eventually offer a Torsen limited-slip front unit on the Tremor—also similar to the Raptor—but the Rebel and TRD Pro make do with open front diffs, although the latter features Toyota’s Multi-Terrain Select system that uses the brakes to improve traction by mimicking a limited-slip front differential.

Along with protective underbody skid plates and greater approach, departure, and breakover angles versus their lesser kin, all four of these pickups roll on 18-inch wheels wrapped with knobby all-terrain tires approximately 33 inches tall, which are connected to control-arm front suspensions and solid rear axles. All sit slightly taller than their workaday brethren. Standard front coil springs can be found throughout, yet the Toyota and Ram are unique for also employing rear coil springs. As we’ve learned from the 10Best-winning Ram 1500, these can aid overall ride comfort and drivability, as well as provide better axle control off-road. Ram takes things a step further by making four-corner, driver-adjustable air springs an option, something the new Tundra offers but only at the rear and not on the TRD Pro. Both the ZR2 and Tremor feature conventional rear leaf springs (the updated 2021 Raptor and the Lightning EV are the only F-150s with rear coils).

Things get more complicated in the damper department. Whereas the Tremor and Rebel stick with straightforward monotube units, the Silverado ZR2 takes a nod from the smaller Colorado ZR2 and the previous-generation Camaro Z/28 by employing Multimatic’s clever spool-valve dampers. For the new TRD Pro, Toyota fits similarly serious 2.5-inch-diameter Fox dampers with internal-bypass chambers and remote fluid reservoirs, which should help it traverse rough terrain at higher speeds. However, the TRD Pro’s Fox shocks are of the simpler passive variety, as opposed to the larger adaptive units that Ford fits to the Raptor; if you want a new Tundra with adaptive suspension, you’ll have to look elsewhere in the lineup. Seeing as we’ve only driven the Ram 1500 Rebel thus far, we’ll have to wait until we can slip behind the wheel of the others to gauge how well their various formulas work when the pavement ends.

Understanding the privilege of having a “rich” passport